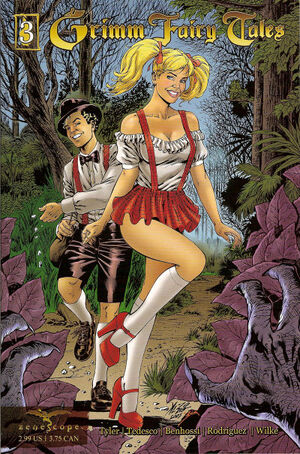 Laura never asked to take mother's place. All I am saying is we really haven't given her a chance.

Appearing in "Hansel and Gretel"Edit

Synopsis for "Hansel and Gretel"Edit

Gina wants to go out, but her parents will not let her as it is a school night. An argument ensues and she is grounded. She decides to run away. While she is packing, her brother, Hank talks to her. He expresses skepticism about her plan, but joins her anyway.

After walking along a rural road, Sela offers them a ride. Hank finds Sela's book of fairy tales in the back seat, which prompts Sela to tell Hansel and Gretel.

Gretel spends the day refusing to her chores and insulting Laura, her stepmother. Her fed up father, Thomas, tells her that under his roof, she will be respectful. Gretel calls his bluff and runs away. Hansel, worried about his sister's safety, follows her. Laura relents, but Thomas says that they will return before dark.

In the woods, Gretel tells Hansel that she plans to go to their Aunt Margaret, but she does not know the way. Hansel leaves a trail of breadcrumbs so they can return home, despite Gretel insisting she will not go back. After dark, Hansel want to rest, but Gretel wants to continue walking. However, they are forced to camp for the night after she hurts her leg tripping over a root she fails to see.

The following morning they discover birds have eaten their trail. They wander lost all day, and find themselves hungry, thirsty, and lost as night falls. They see a cabin and investigate.

Sela (is this Sela Mathers), greets Hansel and Gretel at the door and invites them in. There are many sweets in the cabin, and Hansel and Gretel gorge themselves before going to sleep. Upon awaking, Hansel finds himself in a cage and sees that Gretel is tied to a chair. Sela tells them that she will release both of them if Gretel is obedient and does all the household chores.

After five days, Gretel tells Hansel that she has found the key to his cage and has planned an escape that night. However, before she can enact her plan, Gretel discovers human remains while cleaning and Sela sees that she has. Sela then reveals needle-like teeth and red eyes. A fight ensues between Sela and Gretel, and the latter manages to wrest the cage key from the former.

Gretel unlocks the cage, but before they can escape the cabin, Sela enters the room, now in a monstrous form. She announces her plans to eat Hansel raw instead of cooking him. Hansel blocks Sela's path so Gretel can escape and gets ripped apart for doing so. Gretel pushes Sela into the fire and says a tearful apology to her brother.

They seem to have gone off route, and it is late. Sela offers to let the Bark siblings spend the night at her cabin before they continue to the city the following day. The cabin looks just like the one in the story. The siblings decide to instead go back to their parents, and Sela tells Gina to be kinder to her mother.

Retrieved from "https://zenescopeentertainment.fandom.com/wiki/Grimm_Fairy_Tales_Vol_1_3?oldid=16653"
Community content is available under CC-BY-SA unless otherwise noted.