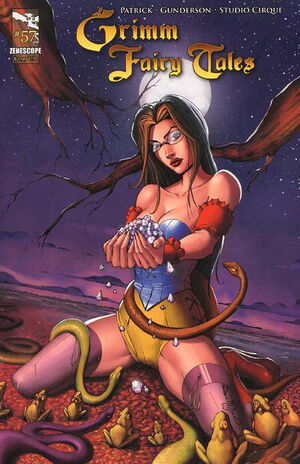 Grimm Fairy Tales present the classic fairy tale Diamonds and Toads. Fresh from her battle with Goblin Queen Sela now has to deal with the wizard's pupil Gruel. Long before he became trained in the art of magic Gruel suffered an evil curse. A curse that would scar him for life and set him on a path of revenge against everything pure or beautiful in the world. His life's goal is destruction and Sela is next on the list.

Retrieved from "https://zenescopeentertainment.fandom.com/wiki/Grimm_Fairy_Tales_Vol_1_57?oldid=10674"
Community content is available under CC-BY-SA unless otherwise noted.