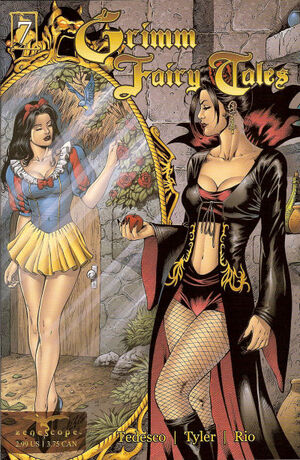 A mysterious illness befalls a high school cheerleader while her caring stepmother stays home to tend to her. But when a heinous act of betrayal is revealed, one person knows such actions can never go unpunished as a journey into Grimm Fairy Tales begins… A beautiful princess becomes the envy of her aging step-mother and nothing will stop the jealous Queen from remaining the most beautiful woman in the land. But when her jealousy is taken too far the Queen finds that the wrath coming her way is unlike anything she could have ever imagined.

Retrieved from "https://zenescopeentertainment.fandom.com/wiki/Grimm_Fairy_Tales_Vol_1_7?oldid=10857"
Community content is available under CC-BY-SA unless otherwise noted.