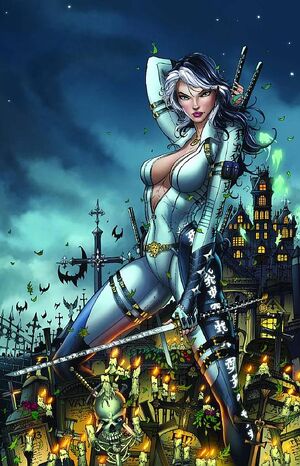 We have nothing to "catch up" on. Our lives were horror when you left us. I have seen nothing but the same since I've returned.

The Being stands triumphant as vampires, werewolves, zombies, and demons terrorize Earth. Sela, Belinda, and the hunters are reeling in the face of this unstoppable foe. As they join together for a last stand against the most powerful evil they've ever faced, the horrifying truth of Belinda's resurrection comes to light. One of our heroes has already died, and all bets are off as Sela and company head toward Antarctica to face an army of vampires led by Samira, the Being's right hand general. The biggest event in Zenescope history continues in this DOUBLE SIZED ISSUE!!!

Retrieved from "https://zenescopeentertainment.fandom.com/wiki/Grimm_Fairy_Tales_Vol_1_85?oldid=15911"
Community content is available under CC-BY-SA unless otherwise noted.