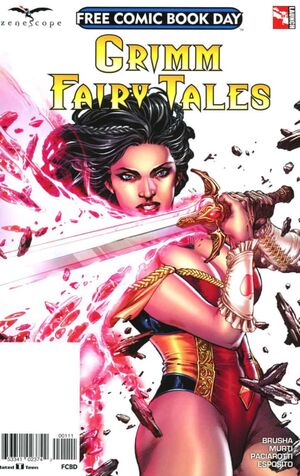 Appearing in "Crypt of the Sphinx; Judgment Rising"Edit

Synopsis for "Crypt of the Sphinx; Judgment Rising"Edit

The world of humans has forever changed and the Grimm Universe has been shaken to its core. Now with the death of Sela Mathers, Earth's long time guardian, the Realms of Power have fallen into chaos. But Sela left behind one thing that may be able to save the world, her daughter Skye. Don't miss this new chapter in Grimm Fairy Tales that takes the series back to its roots. In this Free Comic Book Day special, Skye comes up against a power she has never faced before. A new evil is introduced to the Grimm Universe, a threat in which the Guardian of the Nexus might not be able to stop.

Retrieved from "https://zenescopeentertainment.fandom.com/wiki/Grimm_Fairy_Tales_Vol_2_0?oldid=18164"
Community content is available under CC-BY-SA unless otherwise noted.