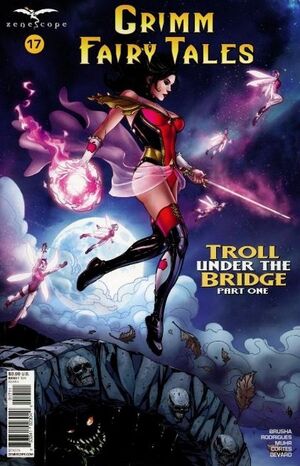 Fairy Tales tell stories of trolls lurking beneath bridges, ready to take unsuspecting travels to their doom. On a visit to New York, Skye learns the true story of trolls... an army of them lurk beneath the city, filled with hate and fear of humans. They've remained hidden for centuries. But now they've found a leader and they don't plan on staying hidden underground any longer. As they prepare their assault only Skye and Samantha stand between them and the people of New York.

Retrieved from "https://zenescopeentertainment.fandom.com/wiki/Grimm_Fairy_Tales_Vol_2_17?oldid=18022"
Community content is available under CC-BY-SA unless otherwise noted.