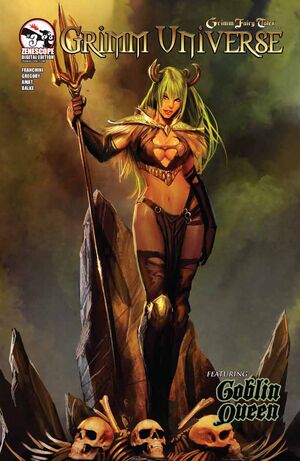 Appearing in "The Goblin Queen"Edit

Synopsis for "The Goblin Queen"Edit

Before Grimm Fairy Tales, before Bad Girls, before the Goblin Queen...there was Olivia. When a town in Myst comes under attack by the vicious forces of the evil Goblin King, a sole survivor will be forced to resort to the most extreme of means to get her revenge against those responsible for destroying her life. But by embracing the evil, will she become even worse than those who ruined her life? Or will she overcome the darkness and find her way back to the light? Don't miss out on the origin of one of the most evil villains in the Grimm Fairy Tales universe! The Goblin Queen!

Retrieved from "https://zenescopeentertainment.fandom.com/wiki/Grimm_Universe_Vol_1_3?oldid=19571"
Community content is available under CC-BY-SA unless otherwise noted.