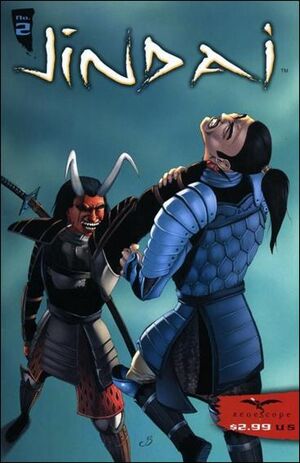 The threat of evil spreads as Lord Shinzen falls further under the spell of the wizard Azuma, whose true allegiance lies with the demon Taku. Shinzen makes a shocking sacrifice to the powerful Demon which completes his decent into madness. Ashiguras victory over Shinzens army is short lived as the demon Taku unleashes his undead minions on the Samurais unsuspecting army. Meanwhile Ishida returns home to a less than warm welcome. His brothers most loyal retainer, Koshiro, has no love for monks and their way of life. Soon both mens beliefs will be tested as they face a force that threatens to destroy not only Japan but all of humanity.

Retrieved from "https://zenescopeentertainment.fandom.com/wiki/Jindai_Vol_1_2?oldid=10961"
Community content is available under CC-BY-SA unless otherwise noted.