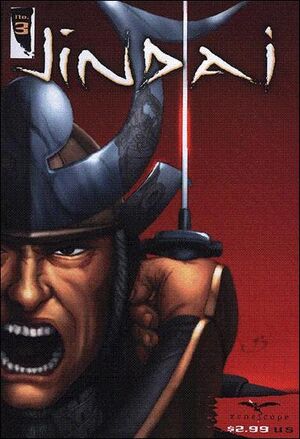 Led by his reanimated general Onin, Takus undead army spreads across Japan like an unstoppable black wave. Armies and villages fall before it as the evil army marches toward Kamakura, intent on the destruction of Lord Natobe and his empire. Ishida mourns the loss of his brother and seeks to understand the cycle of violence behind Ashiguras death while the Samurai Koshiro seeks only vengeance for his fallen master.

Retrieved from "https://zenescopeentertainment.fandom.com/wiki/Jindai_Vol_1_3?oldid=13645"
Community content is available under CC-BY-SA unless otherwise noted.