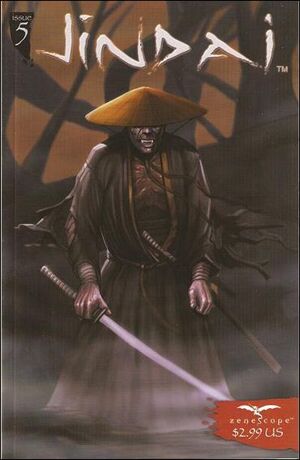 The Demon Takus undead army moves through the city of Shiga like a black wave, killing everything in its path. Lord Natobes army is powerless before it and the cities only hope lies in the magic sword sought by the warriors Ishida and Koshiro. But Ishida and Koshiro have their own problems as they battle a swarm of evil demons deep in the heart of a haunted swamp. Will the two men complete their quest and deliver the sword in time to save their homeland? Or will Shiga merely be the first domino to fall in Takus quest to conquer Japan and move one step closer to his ultimate goal - exterminating the human race.

Retrieved from "https://zenescopeentertainment.fandom.com/wiki/Jindai_Vol_1_5?oldid=17166"
Community content is available under CC-BY-SA unless otherwise noted.