John Darling is one of the major characters in the series.

John is the older of Wendy's nephews. He is ten-years-old, th same age Nathan was when he was teken by Pan with his five-year-old brother, Timmy, the same age John's younger brother, Michael is. Along with Michael, he has been raised by his aunt since the death of their parents. Both he and his brother consider her like a mother. 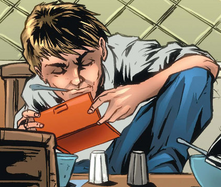 Neverland Prelude
Add a photo to this gallery
Retrieved from "https://zenescopeentertainment.fandom.com/wiki/John_Darling?oldid=9632"
Community content is available under CC-BY-SA unless otherwise noted.