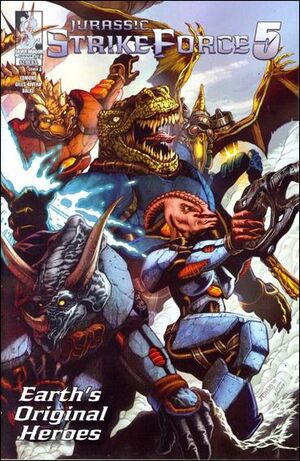 Awakened from his 65 million year hibernation, the evil alien overlord Zalex is ready to resume his conquest of the universe and he's starting with the earth. Backed by his army of evil, mutated Dino-soldiers there's nothing that can stop him...nothing but Dino StrikeForce! Don't miss the seminal issue in the first original series under Zenescope's new Silver Dragon Books line.

Retrieved from "https://zenescopeentertainment.fandom.com/wiki/Jurassic_Strike_Force_5_Vol_1_1?oldid=15049"
Community content is available under CC-BY-SA unless otherwise noted.