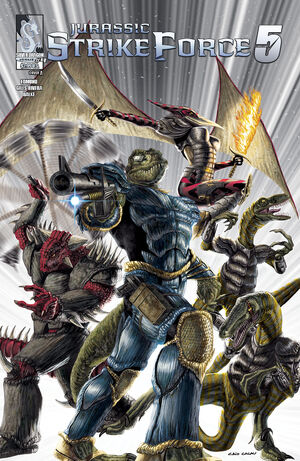 With his evil Dinosoldiers defeated the evil alien overlord Zalex is far from beaten. He still has an ace up his sleeve that promises to be more than the combined might Jurassic Strikeforce 5 can handle; A secret weapon so powerful and terrible it may be just a matter of time before it makes Rex and the rest of the Strikeforce team extinct!

Retrieved from "https://zenescopeentertainment.fandom.com/wiki/Jurassic_Strike_Force_5_Vol_1_4?oldid=19603"
Community content is available under CC-BY-SA unless otherwise noted.