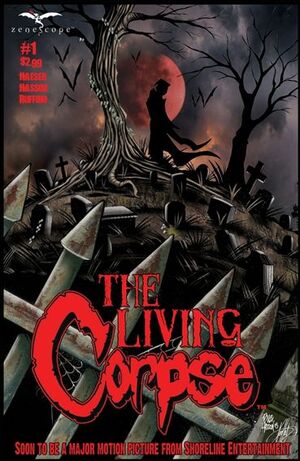 After a vicious battle with a terrifying lycanthrope, the Living Corpse runs into the sexy and headstrong Lilith, the closest thing he has to a friend. Meanwhile the FBI reveals its plans for “Project Lazarus” but only one thing can ultimately make it a success- that one thing is the Living Corpse and one FBI will stop at nothing to find and ultimately destroy him.

Retrieved from "https://zenescopeentertainment.fandom.com/wiki/Living_Corpse_Vol_1_1?oldid=12888"
Community content is available under CC-BY-SA unless otherwise noted.