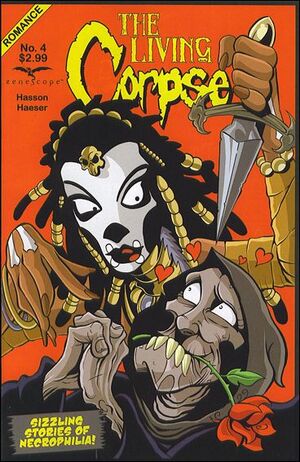 Appearing in "The Voodoo Queen"Edit

Synopsis for "The Voodoo Queen"Edit

The Living Corpse faces his most dangerous foe yet as the Voodoo Queen weaves her spell on our undead hero. What chance does a zombie have against one who has power over the walking dead and can make them do her bidding? And who is the mysterious agent who pulls the strings from the shadows and wants to capture the Living Corpse for his own agenda? The answers begin here as our hero's past starts to unravel… and he will never be the same again!

Retrieved from "https://zenescopeentertainment.fandom.com/wiki/Living_Corpse_Vol_1_4?oldid=12884"
Community content is available under CC-BY-SA unless otherwise noted.