Mika is a publicist for The Bay Mirror and a friend of Phoebe's.

Mika was at the meeting that Phoebe missed at The Bay Mirror.

Despite being a publicist, Mika is supposed to make Phoebe look good for a publicity stunt that Elise dreamed up.

When Phoebe finds out that Mika's mystery guy is none other than Cal Greene, whom she was executed for killing, she thinks Mika is in danger from him. After Elise tells her about the girl Cal beat up, she calls him and confronts him. As much as it hurts her when he doesn't deny it, she breaks up with him. She is in tears when Phoebe finds her in her apartment. She goes back with Phoebe to the recording studio at The Bay Mirror where Phoebe is suppose to do her web chat. 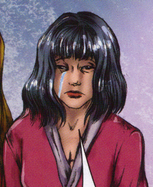 Morality Bites Back
Add a photo to this gallery
Retrieved from "https://zenescopeentertainment.fandom.com/wiki/Mika?oldid=10737"
Community content is available under CC-BY-SA unless otherwise noted.