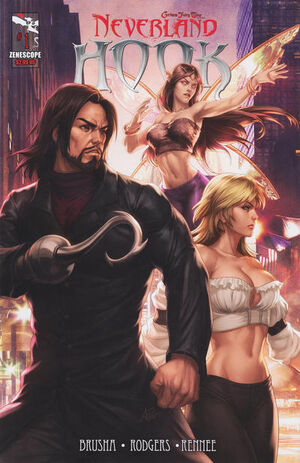 Pure evil. Most of us are lucky. We'll never have to face it. The worst we'll have to deal with is apathy or common every day greed. But for the unlucky few that do cross its path... There's no where to run... and nowhere to hide. When true evil finds us... hope is quickly forgotten... and the most we can do is pray... pray for the end to come fast.

For a time the nightmares had left Nathan Cross. After he destroyed Pan and his hold on Neverland he was able to sleep at night. But now the nightmares have returned...and so has something else. People are starting to disappear again and Cross knows that evil lives in Neverland again. Zenescope presents the second series in its hit Grimm Fairy Tales spinoff, Neverland.

Retrieved from "https://zenescopeentertainment.fandom.com/wiki/Neverland:_Hook_Vol_1_1?oldid=17960"
Community content is available under CC-BY-SA unless otherwise noted.