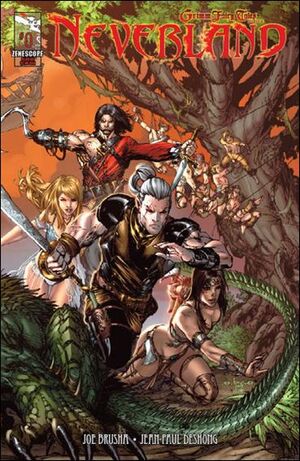 The creators of Grimm Fairy Tales and Return to Wonderland bring you a dark new addition to the Grimm Universe. Pan never wanted to grow up and now he's found key to immortality and a way to rule the realm of Neverland forever. All he needs is a steady supply of children to complete his sinister plans. Once a magical paradise, Pan has reshaped Neverland into the ultimate nightmare for any child unlucky enough to visit. Only one child has ever been able to escape. Now as an adult, Hook may be the only person who can put a stop to Pan's madness. Grimm Fairy Tales fans can't afford to miss this special preview issue. Ships 50:50 with two covers by EBAS that form a wraparound.