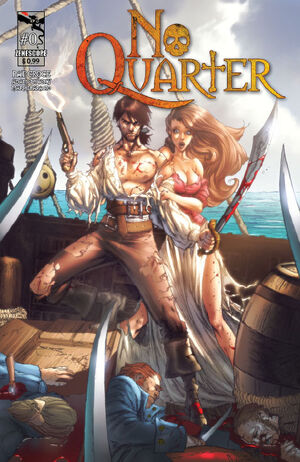 If you're sick of the same cliche of overly-romanticized pirate adventures that has been overdone then this is the series you've been waiting for! A hardcore pirate comic with just the right mix of violence, drama, sex and brutality is finally here. Charlie Drake is a young man who is about to discover that his bloodline is anything but ordinary and sets out to find a new life on the high seas and in the process becomes a legend. This stunning preview issue will give readers a taste of what's to come in the most intense and hardcore pirate series you have ever read!

This comic was released, but it was recalled. According to a retailer on eBay who actually had two copies, one of each cover, there was thought to be less then 50 copies in existance between both covers.

What was supposed to be a thirteen issue run (twelve issues plus the preview) turned into a very short run at one comic con before being pulled for unknown reasons.

Retrieved from "https://zenescopeentertainment.fandom.com/wiki/No_Quarter_Vol_1_0?oldid=12488"
Community content is available under CC-BY-SA unless otherwise noted.