She is a local realtor who agreed to show Piper Halliwell around some properties when Piper was trying to find a site for her restaurant.

She took Piper to several locations, and as Piper declined each one, she grew fed up. She told Piper that she had other clients besides just Piper. When they got to the final location, she didn't show much hope that much would come of it. It was a major fixer-upper.

That was the one that Piper loved. That was also when the Source's spell using Hogan's discord power went into effect and she attacked Piper.

Piper managed to escape her. After the spell had been dealt with, she most likely forgot. According to what the sisters said, only Henry remembered what happened. This might have been because they brought him to magic school.

Piper must have contacted her, again after they dealt with the Source, because Piper was able to get the property that she liked while looking around with her. 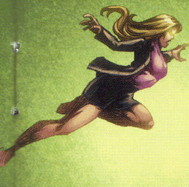