Prue is the oldest of the Charmed Ones and the only one to remain dead for any length of time. Her ghost is currently possessing a brain dead witch.

Prue was the oldest child of Patty Halliwell and Victor Bennett. When her mom died and her dad left, leaving her and her two sister, Piper and Phoebe to be raised by their Grams, Prue helped. Sometimes, she was more of a second mom then she was a sister, especially to rebelious baby sister Phoebe. She was always a lot closer to Piper then she was to Phoebe, Piper becoming her best friend by the time they were adults.

When they found out they were witches, Prue was furious at Phoebe, blaming her for making them witches, since Phoebe was the one who read the spell, restoring their powers. Most of the time, though, she took her job of protecting the innocents very seriously. She did not always take her powers seriously, sometimes using them for personal gain, including knocking a cake into on again, off again boyfriend, Andy Trudeau.

Prue had a problem with pride. As the oldest, she was the most powerful of the three sisters, but she was not strong enough to always act on her own as her sisters seemed to think in "The Power of Two".

Despite being a witch for three years by the time they faced the Source's assassin, Shax, Prue never got to the point where using her powers was her first impulse. Instead of using her powers to moving the doctor out of the way, she pushed him out of the way and got in the way of Shax's attack. This move sent her through one of the inner walls in the manor and ultimately lead to her death.

She might have been dead, but she wasn't forgotten. Her sister, Piper, tried to summon her as they were able to summon Grams and Patty, but was told she had to adjust to being dead. In The Charmed Offensive, Grams and Patty told Piper, Phoebe, and Paige that Prue had moved on to her next life, but when they were away from them, Cole Turner, Phoebe's ex-husband, called them out on the lie and was told to find Prue if he wanted their help moving on.

"Prue Halliwell was the firstborn Charmed One. After our mother died, Prue took on a maternal role when we moved in with our Grams. At first, Prue was skeptical of the magic and Phoebe's leap-before-looking approach to gaining our powers, but she came to full embrace our heritage. Prue always has an interest in history, having worked with antiques in her job at Buckland Auction House before returning to her passion for photography.

"She was not a stranger to loss, having to let her first true love, Andy Trudeau, die in the fight against e﻿vil. Prue's powers of telekinesis and astral projection grew over time, but even these were not enough to save her when the Source's assassin, Shax, took her from our family at far too young an age."

Piper commented that Brittany's death was like losing a piece of Prue, since she was the first innocent Piper and Phoebe saved together with Prue.

When the Charmed Ones fight the Source, Piper yelled "For Prue!"

While Victor and Henry are talking, Victor picks up a picture of his three daughters.

Grams and Patty finally explain that Prue has moved on to her next life and that they won't be able to contact her. Except when they past Cole, he called them out for lying to the girls, so it is uncertain what if anything of their explanation was true. Patty told Cole to find Prue.

Patty reminded Cole that he was supposed to be finding Prue not watching Phoebe.

Cole goes to Alexi, a Seer, in an attempt to find a clue as to Prue's whereabouts. Alexi tells him to look in the place of her namesake.

Prue, in the body of Patience, tries to help Sarah become comfortable with the fact that she is a witch. She doesn't liked being called "Ma'am" and finally gets Sarah to call her by her name (or rather Patience's name). She also shows Sarah what she can do with magic refilling a glass of water. When Sarah leaves she closes the door behind her with a wave of her hand.

Prue is on the phone with Sarah, making sure she is alright after Sarah skipped work that day. She offers to cancel her plans, but Sarah tells her not to. She hears someone at the door and thinking it is her date, she says by to Sarah and answers the door only to find Cole there. He has done something to prevent her date from showing up, but nothing permanent. She tries to convince Cole that she isn't who he thinks she is, but when he will not be convinced, she decides her best route is to try and convince him not to tell anyone else where she is. 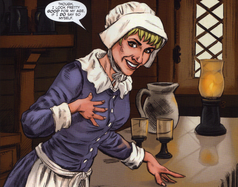 Where There's Smoke There's a Firestarter (as Patience) 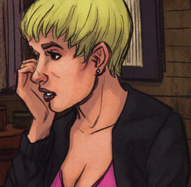 The Heavens Can Wait (as Patience) 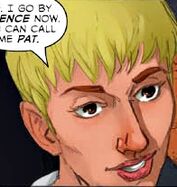