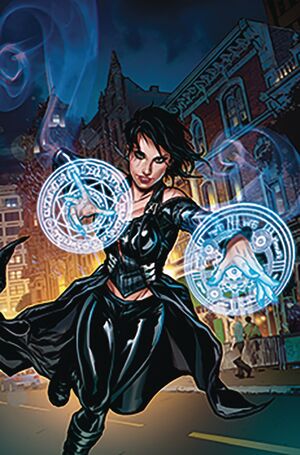 San Diego is facing some kind of impending mystical apocalypse and the epicenter of it might just be Robyn's current love interest; an oil billionaire with a taste for pre-Columbian antiquities. And the city isn't safe from Sam Cavendar's new alter ego. She's Marian's sweetheart by day and a ravaging hell-beast from beyond the stars by night. It's going to take more than a well-placed arrow to make this right! Chuck (Bane:Conquest) Dixon brings the mystery, action and horror you look for in comics!

Retrieved from "https://zenescopeentertainment.fandom.com/wiki/Robyn_Hood:_The_Curse_Vol_1_3?oldid=17691"
Community content is available under CC-BY-SA unless otherwise noted.