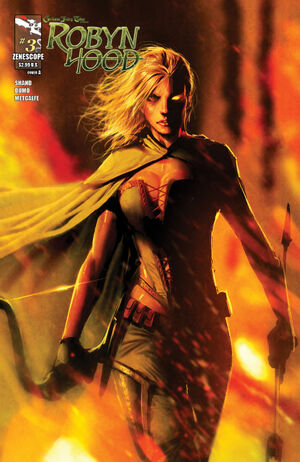 I'll put it this way. There are certain folks in Bree who aren't quite fond of King John. I refer to them as 'everyone'. Only a select few of us, though, have the brains, brawn, and balls-- --excuse my vulgarity, your hoodship-- --to do something about it. The merry men and I have been looking to start a revolution for some time. And when we heard about the villain named Robyn Hood who defied the king's word in public...

The Grimm Fairy Tales spin off series that reinvents the classic tale of action and adventure continues! Over a year has passed since Robyn arrived in the realm of Myst. Now a wanted fugitive Robyn is being hunted not only by the king’s men but bounty hunters as well. But nothing can prepare her when she is faced with the deadliest bounty hunter of all…Little John. Action, adventure and fantasy all come together in this epic mini-series that will leave you breathless!

Retrieved from "https://zenescopeentertainment.fandom.com/wiki/Robyn_Hood_Vol_1_3?oldid=13529"
Community content is available under CC-BY-SA unless otherwise noted.