Zenescope Entertainment Wiki
Register
Don't have an account?
Sign In
Advertisement
in: Pages which use a template in place of a magic word, Heroes, Realm Knights,
and 4 more

Robin Locksley is an hero originally born in the realm of Myst but raised on Earth in a horrible home life. As a teenager, she returned to Myst and became a selfless hero and bandit known as Robyn Hood. Robyn Hood has fought many monsters, human or otherwise, but remains a survivor and one of the most dangerous individuals in the Grimm Universe.

Robin Locksley was born in the realm of Myst. Her parents had gained the favor of demons and held a high position among them. In the Dark Chapel, a christening ceremony was held when Robyn was just an infant. Her parents were about to cut themselves over Robyn when Shang appeared and interrupted the ceremony. As he was leaving, he heard baby Robyn's cry. He took the infant back and the Knights of the Realm stated to kill the child for she had a dark path. Shang did not do that and instead bought the baby to the realm of Earth and left the infant on the stairs of a run-down house.

Robyn's adopted father on Earth was a drug pusher and an abusive husband who used Robyn in all sorts of drug deals. The one saving grace was Robyn's mother who had saved her when she was young. Her mother protected Robyn the best she could but grew terminally sick. The young girl, only 10, started stealing to buy the medicine her mother needed. Her "father" grew angry that the money wasn't being used on him and kicked them both out. Robyn and her mother tried to make it together but it didn't end well. Robyn returned home to find her mother dead and she was alone again. She bounced from foster home to foster home never making friends or connecting. She excelled in physical activities and frequently made her teammates look bad. Because of this and her quick tongue, she was an outsider.

After a gym practice, Robyn ran afoul with the richest man in town's son, Cal King. Cal tried to harass and threaten her so she kicked him and stole his expensive car. Robyn was on the run but Cal's dad called in a favor to leave the police out of it for a while. They rammed her off the road and Cal raped an incapacitated Robyn and used a shard of glass to remove her eye. The police didn't investigate because of the King connection and Robyn was sent to jail for theft.

Robin struggles with the "death" of Will Scarlet, continually dreaming of his corpse. She finds herself bored with the tedium of working with the Realm Knights and their sponsor corporation, Hibocorp. On her latest mission, she is sent to investigate reports of the Dark Horde using a technomancer to smuggle offshore funds. The extraction team attacks but the technomancer is revealed as Avella. She lures Robyn away from the team and teleports her to the lair of the Dark Horde.

When she is teleported, she is taken out by Cindy & Avella and almost killed. Malec stops the killing and orders her not harmed. The Dark Queen tells Robyn that darkness is part of her soul and that she will be one of them just before she chokes Robyn unconscious.

Robyn awakes to find she has been freed and given her weapons. She smells a set-up but uses this time to fulfill her promise and kick Cindy's teeth in. Robyn incapacitates Cindy, kicking her teeth in, but holds back from the kill. She escapes with the help of Avella who finds herself under the sway of the Dark One. Avella tells her that Guy of Gisbourne is not Robyn's kill, but the Dark One is. Robyn is teleported away with knowledge of the Horde's plan.

Avella returns to the Dark Queen and reveals that their plan has been started and is going off without a hitch. Robyn Hood finds her dreams are now filled with her dead boyfriend and dark images of herself taking up her dark destiny.

Robyn & Marion, back on Earth, have opened an investigation agency called Nottingham Investigations that specializes in the mundane and also the weird. One of their first cases is a wiccan named Sam. Her friend started doing a drug to boost her magic and get high as well but Sam noticed that she was expelling a white cloud from her nose at night. Marion determines that it is her soul. Robyn Hood investigates at a dive bar called The Silent Lamb and learns that a new player in town is dealing the mystical drug. He calls himself The Priest.

Robyn and Marian's investigations lead them to an old abandoned church where a man named Peter tries to stop her from entering.  She incapacitates Peter and makes her way towards the Priest. When entering the cathedral, Robyn sees a chapel filled with the drained bodies of girls and the Priest standing in the middle. The client, Sam, is tied down and her soul is being removed. He reveals that he has been waiting for Marion Quin.

Robyn & the Priest engage in a furious battle which leads to Robyn barely "winning" by tossing him out of a church window (which he survives). She learns that the Priest is harvesting souls for a clandestine organization called the Cabal and has to be physically close to the souls he is reaping.

Robyn & Marion go to the victims who took the drug who happen to be at the Roller Derby rink. Robyn confronts Peter and finds out that he is not a bad guy. The witches suddenly begin to faint as their soul begins to leave their bodies towards the subway tunnels and the Priest. 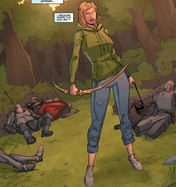 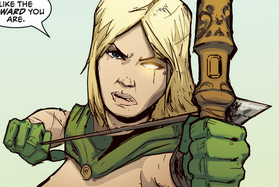 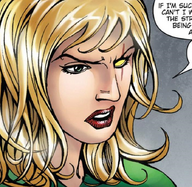 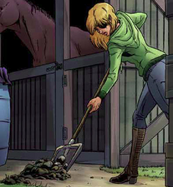