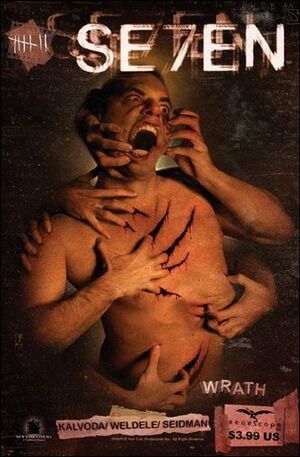 SE7EN #7, Wrath It is John Does final chapter and he is ready to unveil his masterpiece. As Mills and Somerset transport their prisoner to the infamous desert spot where the culmination of Does work will be revealed, another past of Johns life is also concluded. Revealed is the point where the man became the prophet and the wrath of those around him became unbearable. The much anticipated conclusion to one of the most intense and disturbing comic books in years has arrived!

Retrieved from "https://zenescopeentertainment.fandom.com/wiki/Se7en_Vol_1_7?oldid=10536"
Community content is available under CC-BY-SA unless otherwise noted.