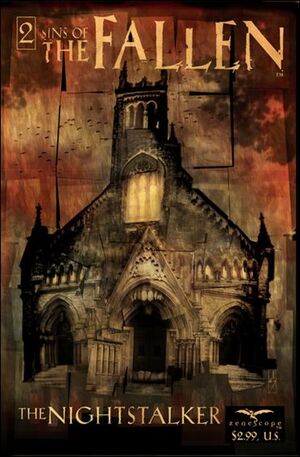 Ted Banks continues his investigation into the increasingly disturbing 'Nightstalker' killings. Suspecting the involvement of a satanic cult, Banks takes his theory to the police where it falls on deaf ears. After following a tip from a mysterious stranger, Banks suspicions are confirmed as he finds a chilling link between these gruesome events and an all too similar series of unsolved ritualistic murders Murders which occurred exactly 100 years ago. Zenescope delivers a gritty, noir-style crime thriller with a supernatural twist Combining the feel of 'Silence of the Lambs' with the world of 'The Prophecy' this series is a must read for fans of both genres!

Retrieved from "https://zenescopeentertainment.fandom.com/wiki/Sins_of_the_Fallen:_Nightstalker_Vol_1_2?oldid=10493"
Community content is available under CC-BY-SA unless otherwise noted.