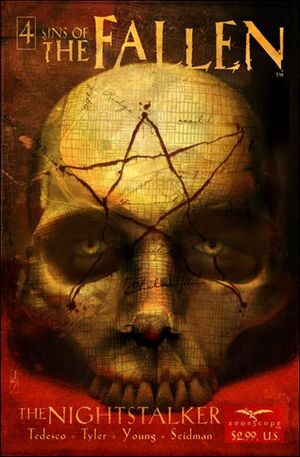 Ted has survived the attack on his life thanks to the mysterious Daniel who goes on to explain a motive behind the church of Asmodeus. Daniel describes the story of Lucifer and the 'Watchers' and the reasons they waged war against God. Although Ted finds it all implausible he cannot deny the reality of the situation at hand. Meanwhile a meeting occurs within the occult ranks as a servant is warned to make sure there are no more setbacks. Banks and Daniel are getting too close and any interference could bring failure to their plans. And if that happens, there certainly will be hell to pay.

Retrieved from "https://zenescopeentertainment.fandom.com/wiki/Sins_of_the_Fallen:_Nightstalker_Vol_1_4?oldid=10495"
Community content is available under CC-BY-SA unless otherwise noted.