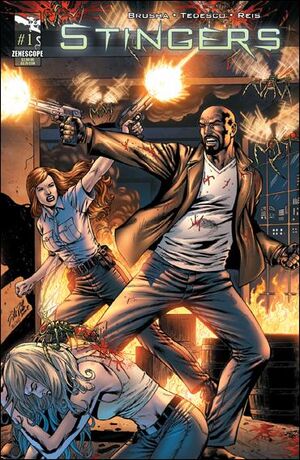 They needed a new planet in order to survive They just found us. Brian 'Hawk' Hawkins is an Atlantic City bounty hunter and hes fed up with the world and everyone in it. But as he tracks his latest bail jumpers to a small New Jersey town he finds much more than what he bargained for. Now Hawkins must make the decision to flee town or to stay put and fight to save the one thing he can no longer stand: Humanity. Do not miss issue 1 of the supernatural action mini-series that combines the tone of 28 Days Later with absolute intensity of Aliens. Do not miss STINGERS. They're coming for you.

Retrieved from "https://zenescopeentertainment.fandom.com/wiki/Stingers_Vol_1_1?oldid=19721"
Community content is available under CC-BY-SA unless otherwise noted.