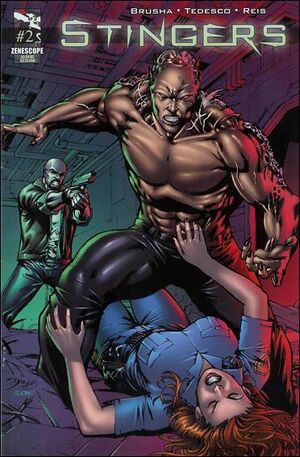 Hawkins is hot on the trail of his final two bounties but first needs to get past the beautiful and tough as nails town sheriff, Risa Keller. When Hawk agrees to let Risa tag along, he finds out quickly that he's glad she did as the two find themselves in the fight of their lives against a pair of beings that simply cannot be of this world. Do not miss issue 2 of the supernatural action series that combines the tone of 28 Days Later with intensity of Aliens. They needed a new species in order to survive... They just found us.

Retrieved from "https://zenescopeentertainment.fandom.com/wiki/Stingers_Vol_1_2?oldid=10841"
Community content is available under CC-BY-SA unless otherwise noted.