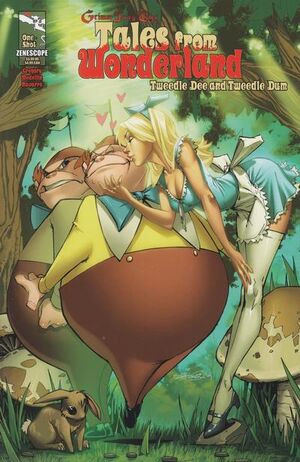 Now be a good little boy, and DO try to scream.

A young teen is constantly pushed by his demanding and overbearing father but what happens when the father and son find themselves transported to a world that can easily turn everything you know into a nightmare of epic proportions? The tables are turned as two men become three and one of them seeks a new kind of revenge. Enter a world where madness reigns supreme, enter the world of Wonderland! Includes part 3 of back-up story “The Arrangement.”

Retrieved from "https://zenescopeentertainment.fandom.com/wiki/Tales_from_Wonderland:_Tweedle_Dee_%26_Tweedle_Dum_Vol_1_1?oldid=19741"
Community content is available under CC-BY-SA unless otherwise noted.