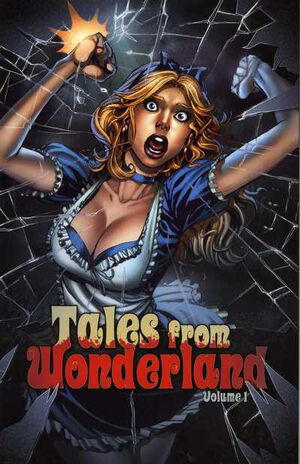 The one-shot issues of the series that reinvented Wonderland are now collected together in one incredible trade paperback!

When two young twin girls are pulled into another dimension their purity will not be enough to save them. Lost, scared, and unable to escape, the girls must find ways to adapt as they eventually realize that being raised by madness itself isn't all that bad...

A local hero has somehow been thrown into insanity as he attempts to adapt to a world intent on taking his mind. But he soon realizes that there is only one way to adapt to the un-adaptable...

Before the horror that tore a family apart, there was a child named Alice who entered a foreign world only to return forever changed. Her sanity would be taken, but her life would not be wasted. Witness the story of the girl who lost everything only to become an unlikely hero...

A scientist discovers a portal to another realm but his obsession proves much more costly than he ever could have imagined.

Four incredible tales straight from a horror-filled realm unlike no other. Enter a place where madness and terror reign supreme...

Enter the world of Wonderland!

Retrieved from "https://zenescopeentertainment.fandom.com/wiki/Tales_from_Wonderland_(TPB)_Vol_1_1?oldid=16950"
Community content is available under CC-BY-SA unless otherwise noted.