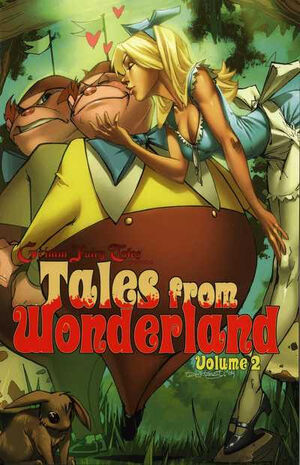 From the twisted minds of Raven Gregory, Ralph Tedesco, and Joe Brusha comes the second collection of tales straight from the insanity that is Wonderland.

Get up close and personal with some of Wonderland’s most notorious characters as the Cheshire Cat comes to a crossroads for the first time in its existence; the Red Queen prepares for the ultimate battle to take back what is hers; and brothers Tweedle Dee and Tweedle Dum have their incredibly disturbing past revealed. The conclusion of the Wonderland origin story will be told as the madness unfolds to reveal what the strange realm truly is.

Retrieved from "https://zenescopeentertainment.fandom.com/wiki/Tales_from_Wonderland_(TPB)_Vol_1_2?oldid=18280"
Community content is available under CC-BY-SA unless otherwise noted.