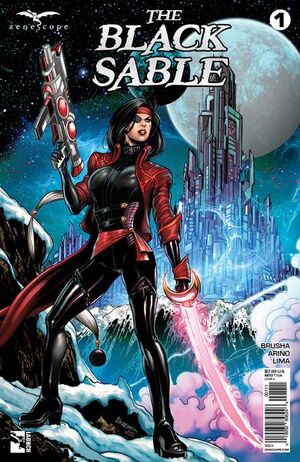 One hundred years in the future the “age of pirates” has returned as mankind reaches out for the stars. Schooners have been replaced by star ships and these pirates wield space age weaponry, but they are as bloodthirsty and ruthless as their predecessors were centuries before them.

Experience a new universe of swashbuckling action and adventure in the vast reaches of space!

Retrieved from "https://zenescopeentertainment.fandom.com/wiki/The_Black_Sable_Vol_1_1?oldid=18869"
Community content is available under CC-BY-SA unless otherwise noted.