The Pied Piper of Hamelin

The Pied Piper of Hamelin is the main villain of the series, "The Piper". He was first introdcuced in Grimm Fairy Tales 12.

"The Piper was once human with an incredible talent for music. His music was so beautiful it was said to have the power to hypnotize even the most exotic of creatures. But betrayal, bitterness and hatred tainted his gift and resulted in his gruesome death. The Piper struck a bargain with the Dark One for eternal power. He now uses this power to strike bargains with desperate humans who have a deep desire for something seemingly unobtainable. He then uses trickery and deceit to ensure he can collect their souls for himself."

Once Upon a Time[] 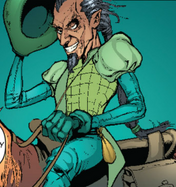 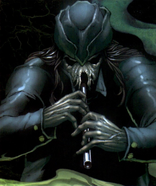 Once Upon a Time

The Piper
Community content is available under CC-BY-SA unless otherwise noted.
Advertisement