The Source of All Evil is the leader of the Underworld, or at least he is when he is alive.

The Source of All Evil has held many faces. When he originally went after the Charmed Ones, the current Source had reigned for over one thousand years. His assassin, Shax, killed Prue Halliwell, but failed to kill Paige Matthews before she could join her half sisters to defeat Shax. Less then a year later, Paige teamed up with Piper, Phoebe, and Phoebe's fiance, Cole Turner to defeat the Source.

A plan of the Seer's got the Source's powers transfered to Cole and possessed him with the essence of the Source. The Source was once more defeated when the three sisters vanquished Cole.

The Source was transfered from Cole to his and Phoebe's unborn son, the true object of the Seer's plan. She stole him with the intent to use him as leverage to make herself the Source. She claimed that he was never Phoebe and Cole's son to start with, always hers. While Phoebe was pregnant with this Source and later when the Seer was, he was able to control things at will and add additional fire power to what either Phoebe or the Seer had. He was destroyed when the girls got the Seer to use too much of his power, destroying him, the Seer, and every demon in the room, leaving behind only the Charmed Ones.

The original Source returned briefly when a demon kidnapped Wyatt Halliwell to try and summon him. It worked, but the sisters were able to send both him and the demon who used Wyatt back to where he came from.

"The ruler of the Underworld, The Source of All Evil is the most powerful demon in existence. The Charmed Ones first encountered the Source in the body of a demon bearing the scars of an ancient battle, but the Evil essence has possessed the bodies of numberous demons over the centuries. The Charmed Ones succeeded in vanquishing the initial demon body, but its essence was transfered into other evil entities before being banished to the Wasteland. The Source returned, briefly, years later in his earlier, scarred demon form that was ultimately vanquished."

Neena and Hogan returned to the Underworld and reported their progress to a whisp. The whisp turned out to be the essence of the Source and by the end of the issue, he had been returned in a brand new body, this time, a golem.

On the suggestion of Neena, Hogan lent the aid of his discord power and the Source used it to turn the innocents against the Charmed Ones, even Paige's husband, Henry Mitchell. With the innocents attacking, the Source chose then to reveal himself and attack.

Knowing the Source was back, the Charmed Ones vowed to end the Source once and for all.

The battle is on. The Charmed Ones collected the magic of the entire magical community in order to fight. Piper got Coop to bring her to collect Excalibur for her to use once Wyatt released it from it's stone. The combined power vanquished the Source. 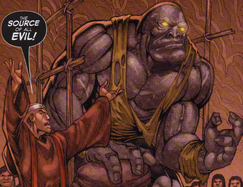 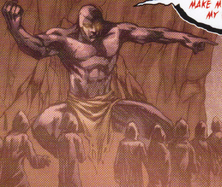 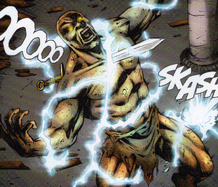 Unnatural Resources
Add a photo to this gallery
Retrieved from "https://zenescopeentertainment.fandom.com/wiki/The_Source_of_All_Evil?oldid=8930"
Community content is available under CC-BY-SA unless otherwise noted.