Tyler Michaels is a firestarter who was an innocent of the Charmed Ones.

When he first met Paige Matthews, it was when he set a trashcan on fire in the SBSS building. He was hesitant at first, but he slowly grew to trust them, especially when Piper showed him her power to blow stuff up and when the Charmed Ones protected him from his foster parents. Tyler used what Piper had taught him to catch his foster parents on fire, which freaked him out.

They helped him get off the bounty hunters list and out of the Source's attention. As a firestarter, Tyler's power was much desired. Firestarters are not necessarily any specific type of being. They can be a witch or a demon, but most are just otherwise normal humans. It was not established what Tyler was.

Having his powers bound did not keep Tyler off of Neena and Hogan's radar and in Innocents Lost, he was the first innocent that Paige wanted to check that her husband, Henry Mitchell had not already confirmed was either dead or missing. When Piper and Paige arrived, they found the house on fire and Tyler under attack. Tyler's fear had unbound his powers, protecting him long enough to allow the two sisters to reach him and vanquish the demons. They brought Tyler and his family to the manor, since their home was burned and decided that was the best way to protect other innocents, to bring them to the manor.

Though he is not specifically mentioned they mention that the magical innocents are in Magic School. Since Tyler is clearly magical, it is to be assumed that he was brought there. This is further supported by the fact that he is in magic school when they are trying to evacuate it before the battle in the next issue.

Tyler is in Magic School and he wants to help rather than be evacuated with the others. He protests that Harry Potter let the older kids stay and help fight, but it is pointed out to him that this isn't Harry Potter and he isn't even a student quite yet. 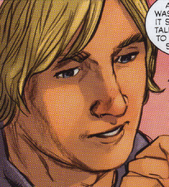 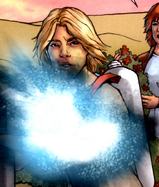 The Power of 300
Add a photo to this gallery
﻿
Retrieved from "https://zenescopeentertainment.fandom.com/wiki/Tyler_Michaels?oldid=12874"
Community content is available under CC-BY-SA unless otherwise noted.