Victor is the father of Prue, Piper, and Phoebe.

Victor Bennett married Patty Halliwell and entered a world he never knew existed. Patty never told him when they were dating that she was a witch. She certainly never told him that their daughters would be witches, not before she married him anyway. They had two daughters, Prue and Piper and then they thought that would be it. Patty's mom, Penny Halliwell didn't want her daughter married to someone who was nonmagical.

Things did not go smoothly and Victor and Patty took a break or two, but during one of the times they were back, the unlikely happened, Patty got pregnant again. Before they found out Penny had chased him off, again. They did get back together, again, but it's unclear if they got together, again before or after their youngest, Phoebe, was born.

It's uncertain whether Victor left, again, before the final time, but he was still around Christmas of 1977 and he must have left shortly after that, because Patty told her daughters that Paige, her daughter with her whitelighter, Sam Wilder, was conceived after Victor was gone and Paige was born seven months later.

The last time Victor saw his daughters while they were growing up was when he saved Prue from the Nothing. This was at some point after Patty had died and according to Victor when he finally returned, nothing less then a spell would have kept him away. He also said he was constantly bumping heads with Penny while he was around while they were girls and that (despite the fact that he saved Prue) seeing the danger they were constantly in despite having had their powers bound, he knew he couldn't handle it any more.

When Victor returned, he tried to make up for lost time. Though he wasn't around all the time and after the first visit, he was gone for another two years before showing up again. This time he stuck around even when he found out middle daughter, Piper, was marrying her whitelighter, Leo Wyatt. Since he was convinced that Sam was responsible for the break up of his marriage, possibly one of his mother-in-laws many tactics to try and get rid of him. There wasn't any noticeable awkwardness between him and Sam's daughter, Paige, either when she was brought into the fold after Prue's death.

While he did a poor job as a father, he did a great job as a grandfather, seeming to be the favorite relative of grandson, Chris.

It mentioned that Phoebe was in New York in a failed attempt to find her father.

In Last Witch Effort, he had a talk with Paige's husband, Henry Mitchell, about being someone nonmagical married to a witch, something that had been bothering Henry since Mortal Enemies when he was affected by a spell and attacked Paige. 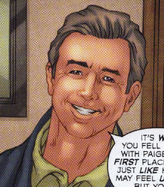 Last Witch Effort
Add a photo to this gallery
﻿
Retrieved from "https://zenescopeentertainment.fandom.com/wiki/Victor_Bennett?oldid=12016"
Community content is available under CC-BY-SA unless otherwise noted.