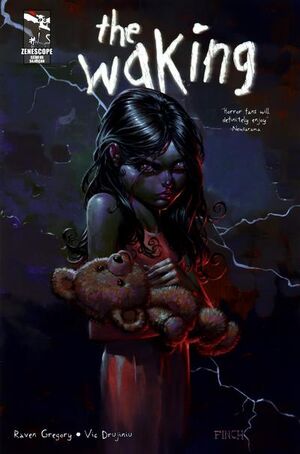 In the big city, four police detectives investigating two routine murders discover that the victims of these crimes are coming back from the dead in search of those responsible for their murders. Now the detectives are in a race against time to find the source of the recent "wakings." Meanwhile, a father with an incredible ability must choose between avenging his daughter's death or losing her forever. From the writer of Zenescope's Wonderland trilogy and Image Comics "The Gift" comes a 4 issue mini-series that brings an incredibly fresh and new twist on the zombie genre!

Retrieved from "https://zenescopeentertainment.fandom.com/wiki/Waking_Vol_1_1?oldid=17948"
Community content is available under CC-BY-SA unless otherwise noted.